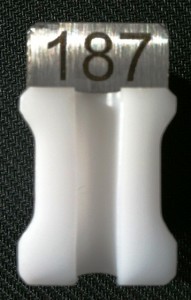 For millennia, warriors have taken war trophies to commemorate their victories. They range from the souvenir to war reparations to the just plain gory. We’ve got flags and weapons and things like seagoing vessels, such as the US Coast Guard’s tall ship Eagle - courtesy of the defeated Nazi navy. (My son has a lot of great memories on the 295 foot Eagle.) And then there are human trophies. You know scalps, heads, ears - that kind of stuff. So, where am I going with this? Lean implementation is a never-ending war. It’s a hard and noble effort. Occasionally, we need to smell the roses and reflect. This includes basking (ever so) briefly in the team’s success. A war trophy can help in the commemoration, serving as a poignant and necessary reminder of a substantial past victory…and the possibility of future ones. Sometime the victory is the fruit of superhuman work. Like tearing down a two story, 220 square foot cinder block and wood building that impeded flow – and accomplishing that in one shift (True story. Unfortunately, I didn’t keep a chunk of concrete!). More often than not, there is physical work, but the real win has to do with the organization taking a giant lean leap of faith. In other words, doing something that definitely does not seem in the best interest of an otherwise healthy sacred cow. Now that is deserving of a lean war trophy. I remember my first trophy, circa 1995. It was an elaborately machined aluminum “stopper” – picture something on the order of a one foot wide and 10 inch high book-end. Its purpose in life was to prevent the partially assembled product speeding downstream on a motorized conveyor from overwhelming the downstream assembly operators. These downstream operators could position the stopper so that it straddled the conveyor and basically dam it up…at least until one of the upstream pieces of equipment went down (a routine occurrence) and provided an opportunity to catch up. Interestingly enough, this line (actually there were 6 identical lines) had been proudly called the “JIT Line” for years!?  You know just-in-time…as in takt, flow, and pull. Clearly, none of that JIT stuff was going on, just a lot of overproduction and frustration. Fortunately, these lines were ultimately reconstituted into single-piece flow cells, without any conveyors or isolated islands. I took one of the obsolete aluminum stoppers as a war trophy - less so for the physical conversion from push to pull. More so for the important revolution in thinking. That was something I wanted to remember. Pictured in this post is a nylon block - one of a couple hundred that were used to hold product as it wound its way through a curing cycle. It’s my most recent trophy. Admittedly, I encouraged others to take one as well. The block was liberated from a machine - actually, there were two identical ones…twins! Both of the machines have been moved away to a warehouse. Hopefully, it’s a very temporary stop on the way to scrap yard. Anyway, these machines were the proverbial universal automated behemoths, engineered and built by folks who didn’t have to live with them. They took up a lot of space, were less than reliable, required two pairs of operators to feed and unload, didn’t necessarily match takt time, etc. In a John Henry match-up, the manual lines would win. They are more productive, more flexible, produce better quality, and so on. But, when you spend a lot of money on a project, it’s tough to say goodbye. Unless of course, the organization starts to really get it. And they did, hence the trophy! I’ll keep this one for a while. So, do you have any Lean trophies? Related posts: The Perils of “Lean Relativism”,  Want a Kaizen Culture? Take Your Vitamin C!