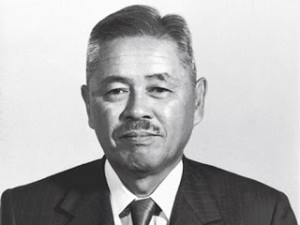 Born February 29, 1912, Taichii Ohno envisioned a way of working that would evolve into the Toyota Production System (TPS), now known widely as Lean. Several key elements of TPS include takt (interval or pace of customer demand),  muda (the elimination of waste), jidoka (the injection of quality) and kanban (the cards used as part of a system of just-in-time stock control). Ohno was born in Dalian, in eastern China, he joined Toyota Automatic Loom Works in 1932.   In 1943 Ohno switched to work as a production engineer for the Toyota car company, at a time when its productivity was far below that of America's mighty Detroit car industry. In 1956, Ohno visited US automobile plants, but his most important discovery was the supermarket, something unknown in Japan at the time.  He marveled at the way customers chose exactly what they wanted and in the quantities that they wanted, and the way that supermarkets supplied merchandise in a simple, efficient, and timely manner. He took these observations back and incorporated then in further enhancements to the TPS kanban system. [1] History of Toyota Motor Manufacturing Kentucky (TMMK) [2] Guru: Taiichi Ohno, in The Economist, July 3, 2009.