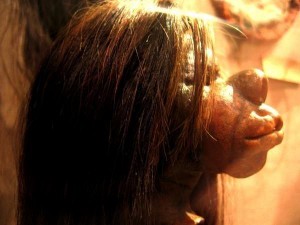 To avoid confusion, the term headhunter in this post does not refer to those who: 1) take the severed head of others as some sort of trophy (that practice, as far as I know, is defunct), or 2) find, at a price, qualified candidates for employment at their clients. Rather, we’re talking about those leaders who see their own employees as fungible things, as ”heads.”

That thinking is clearly counter the lean principle of respect for the individual.

Tell me that you’ve never observed these headhunters! They blow quickly by the first three objectives of improvement (easier, better, and faster), and get straight to cheaper. Cheaper of course means reducing heads – not the size of heads, that would be head shrinking. Some of the other kind of headhunters did that…

They see productivity as an opportunity to take out heads. You can usually identify them easily. They often say things like, "There are 37 heads in that department," or "How many heads can we take out?" Their comfort in using the term "heads," belies their values and motives.

They don’t understand one of the oldest and most foundational promises of lean – no one loses their employment due to productivity improvement.

This is not a lifelong promise of a specific job, but it is employment security. It certainly does not preclude redeploying folks to different positions, but it often provides new opportunities for personal growth.

I wonder if headhunters can get wrap their headhunting heads around an institution like Toyota. Toyota has often said that they don’t build cars as much as people.

During the depths of the last recession and beleaguered by the ostensibly false, but publicly widespread belief that Toyota was complicit in the unintended acceleration thing, Toyota could have laid many of their folks off. Certainly, others in the industry were doing it. Instead they chose to invest their “idle” time in training and kaizen. Their belief was that if they laid-off a 10 year employee, they would lose the wealth of experience and long-developed skill set (like problem-solving). It would take 10 years to develop a new one!

Doesn't that make a LOT of sense?

So, when you identify a headhunter, try to convert them. Extol the virtues of in-sourcing and growing the business as well as growing people. If the conversion is unsuccessful, consider running away...fast.

Related posts: Easier, Better, Faster, Cheaper…in that Order, Humility, or What Does Dirt Have to Do with Lean?