Another Classic Lean Question – “Do You See What I See?” 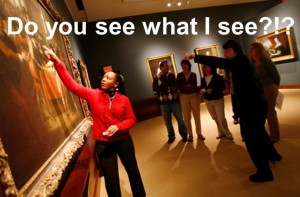 I love simple questions. Specifically, I love questions that are ostensibly simple, but can spur deep reflection about important stuff…and ultimately improvement.

As discussed in a prior post, I like the question, “So what?” Those two words seek to identify the “actionability” of things like performance metrics and visual controls. For example, if tier I meeting performance metrics do not provide unambiguous insight to stakeholders on the causality of performance gaps AND the causality can’t be at least partially addressed by the stakeholders, then the metrics probably don’t pass the “So what?” test. In fact the metrics have entered the realm of bad wall art.

Yes, I know it’s three times longer than, “So what?” But, I think it’s equally as weighty. (Heck, we can abbreviate it as DYSWIS?)

Here’s two ways DYSWIS? can be applied in a lean context.

An example - three people walk the newly designed leader standard work. They stop at each audit point and, without conversing, do the audit…and then share. The latest stop is at a location of raw pre-staged castings for a machining center where visual controls are supposed to indicate whether the pre-staged material is in the proper location, replenishment has been triggered and its replenishment time (if one has been triggered) has not come and gone without being fulfilled. One of the three thought he could easily tell that things were normal. Another found the visuals to be ambiguous and wasn’t sure. Another thought the “normal condition” of two pallet positions, triggered for replenishment when one was empty, etc. was not sufficient given the waterspider’s cycle time. Do you see what I see? I guess not, we need to make some adjustments.

Gemba walk-based coaching. Gemba walks are a great opportunity for leaders to teach. The walks can be done one-on-one or one-to-many.

An example – an operations director has noted a recent spate of abnormal conditions in an area within a specific value stream. The director takes the young value stream manager for a gemba walk. They pause at a number of targets. The director frequently asks the manager what he sees. Often the manager properly identifies normal and abnormal (and the manager addresses the abnormalities). However, in several areas, in fact the ones that the director was initially concerned about, the manager incorrectly identifies some abnormal conditions as normal. In fact, in a couple situations, it seemed like the manager was guessing (yes, I think that the kanban batch board is maintained properly!?)  At each trouble area, the director shares what he sees and why he sees what he sees…and they reconcile why they don’t share the same insight. Again, DYSWIS?

So, I humbly propose, “Do you see what I see?” as, at the very least, a worthy lean question.