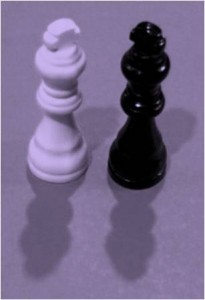 We've all heard the oversimplification that lean is about attacking waste, while six sigma is about reducing variation. Oh yeah, and theory of constraints (TOC) is for increasing throughput by identifying and exploiting constraints.

Oversimplification makes things easy to label and seemingly easy to communicate. Unfortunately, it's not the whole story. In fact, it trivializes the holistic nature (especially) of lean and it artificially isolates and extracts.

This post is not intended to explore lean versus six sigma in an academic way - it would be  very long and probably unsatisfying. What I would like to discuss is how unfruitful it is when an organization does not successfully fuse the two within a comprehensive business system. One that, by it's very nature, establishes the principles, systems and tools, so that there are not two camps, but one.

Now I don't have a huge sample size. We're talking about ten. But it seems that whenever an organization initially launches a serious six sigma effort and then, sometime after it has taken root, later introduces lean, there's an uneasy and separate "coexistence." Not unlike the Hatfields and the McCoys. (This phenomenon does not seem to occur when the order of adoption is reversed - lean first, then six sigma!) A famous first century quote as captured within Matthew 6:24 [RSV], summarizes the dynamic well,

(Of course, there's a bunch of folks within most organizations who don't serve either of the two...but that's an entirely different story.) The point here is that any enterprise that seeks, at a minimum,  to transform its operational performance and  necessarily its culture cannot afford to have the incoherence of two separate tribes.

The following is a caricature of the tribes:

The aftermarket "lean bolt-on" kit that is sold to many of the heretofore six sigma-driven companies can be as unsightly as that balding guy with a bad toupee. Just adding an "L" to the "SS" does not, by itself, make things unified. I know of one creative multi-billion dollar company that tucked the "L" AFTER the "SS." Yes, SSL! Is there a belt for that?

Here I suggest some good old agnostic thinking. For the moment, ditch the "L" (no one called it "lean" until the mid-Womackian period, anyway) and ditch the "SS" (so named by Motorola). Instead, go to the principles and think anew.

And where's a good source for these principles? Well, as usual, I defer to the Shingo Model for a cogent compilation and presentation of "Principles of Operational Excellence."

No, you can't effectively serve two masters. So, define ONE that embodies and satisfies the principles. Then rigorously align the organization, live the principles and watch the enterprise thrive.

Related posts: Don’t Blindly Copy the TPS House. Build Your Own., Everyone Is Special, But Lean Principles Are Universal!